There are a number of different ways in which we might talk about making the use of digital data more equitable, empowering and ‘fair’. While these approaches have similar-sounding names (and often share similar aims) there some important distinctions to be made. For instance, while issues of ‘Data Rights’ and ‘Data Ethics’ continue to attract attention, interest is also growing in the specific idea of ‘Data Justice’.

This emphasis on ‘Justice’ is a deliberate attempt to move beyond seeing data as an individual problem and responsibility. Instead, data is framed as a collective concern that is connected with broader patterns of injustice. As Hintz and colleagues (2018, p.140) put it:

“the aim would be to situate datafication in the context of the interests driving such processes, and the social and economic organisation that enables them. From this, it would be possible to engage with societal implications of datafication in relation to other social justice concerns”.

These themes are expanded in Linnet Taylor’s (2017) framework for data justice – again stressing the connections between data rights (the power to better engage with data) and data freedoms (the power to choose how to engage with data). As Taylor puts it, this encompasses “the need to opt out of data collection or processing, the need to preserve one’s autonomy with regard to data-producing technologies and the need to be protected from and to challenge data-driven discrimination”. These rights and freedoms can be seen in terms of ‘three pillars’ of data justice: 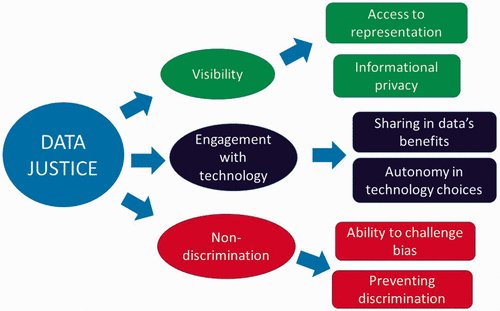 Making these connections between data and broader structural issues of societal inequality, discrimination and oppression raises a number of significant contentions:

All told, the data justice approach is infused with an intention to make data a political issue. In an era of ‘digital resignation’ and ‘surveillance realism’, we cannot expect people to automatically challenge data-driven disadvantages and inequalities that critical commentators might assume are obviously problematic. Instead, politicisation is a necessary first step in generating the possibility of change. In this sense, the data justice approach is imbued with a spirit of collective activism and provocation …

“a wider collective moment can shake the foundations of the datafication paradigm, to reveal what else might be possible” (Hintz et al. 2019, p.142).